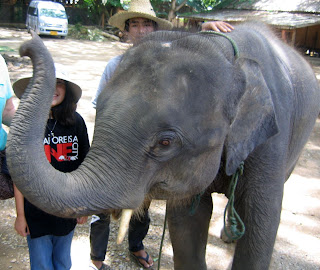 We are so very grateful to Lisa for telling us about Mae Sa Elephant Camp. And we are very glad we visited Mae Sa first. Otherwise we would have thought that all the elephant camps were like the one we visited today. And that would be a bad thing. 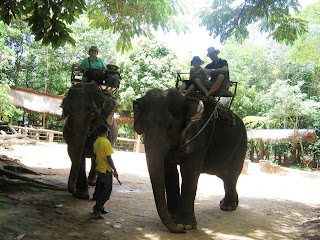 Today we took the Safari Tour with Journey Tours. The tour guide was very nice and a good guide. The van was comfortable and fairly new. They were prompt and followed the schedule pretty well. But we did not enjoy much about this tour. We visited Mae Sa on our own with the private taxi for about half the cost of the Safari Tour; and Mae Sa was infinitely better. 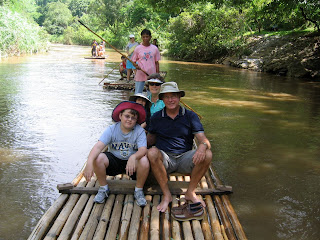 It was more than an hour's drive from Chiang Mai to the Mae Taeng Elephant Camp. The guide said we were only about 100 miles from the border with Burma (Myanmar). He also said the Mae Taeng Elephant Camp was connected in some manner with the brother of the King of Thailand. I'm not sure exactly what the connection is -- whether he provides money for the camp or if the tourists visiting the camp provide money to him. 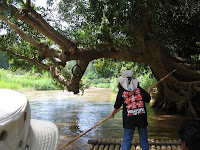 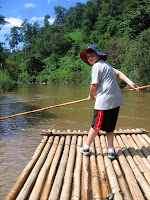 First we rode small bamboo rafts down the river for an hour. The jungle and hillside scenery was pretty. We saw elephants bathing in the river and one small crocodile on the bank. Zachary poled the raft for awhile and BeBe also had the opportunity to try it. Thank goodness there was a man on the back who could steer the raft back to the middle when needed. There were 2 low wooden benches where we sat for this river ride. This turned out to be the best part of the tour. 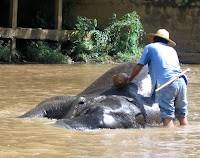 The van met us when we finished the rafting and brought us back to the elephant camp.

Then we spent several minutes touching the smaller elephants and interacting with their mahouts. Then we all walked down to the river bank and the elephants walked into the river for their daily baths. Each one laid down in the water and was scrubbed by his or her trainer. They appeared to really enjoy playing in the water. This bath is their treat before they perform in a show.

The show was very, very disappointing to us after seeing the show at Mae Sa. There were very few elephants to perform in this show. The elephants were not as well trained and did not appear to be as content with their lives in this camp. It was a big disappointment. 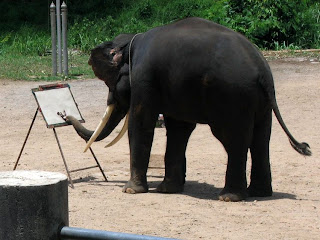 Only one elephant had been trained to paint. Her name was Suda. The painting she did was not as impressive as the ones we had seen painted by the elephants at the Mae Sa Elephant Camp, although to us any painting done by an elephant is unique because we had no idea that elephants could be trained for such a thing. For an elephant to be able to select colors and to arrange those colors with brush strokes into a recognizable pattern or form is absolutely amazing. The gift shop at the Mae Taeng camp had many paintings supposedly done by Suda, but those were far more elaborate than the painting she did during this show. I have strong doubts as to the authenticity of those gift shop paintings. One of the reasons we only bought paintings that we had watched being painted by the elephants at the Mae Sa camp a few days earlier. 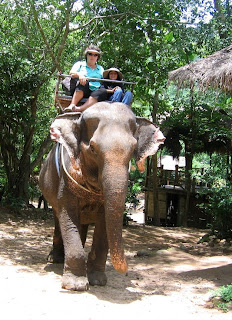 Now it was time for the obligatory elephant ride. Neither Bill nor I wanted to ride an elephant; but this was a longer ride and part of the tour, so we didn't really have much of an option not to participate. We did not want the kids to ride off unattended on an elephant into the jungle for an hour. I rode with BeBe and Bill rode with Zachary. Our elephant was in front of Bill and Zach's elephant on the walk.

The troubles started almost immediately. There was a slope from the boarding platform down to the river that we were to cross. The slope did not seem that steep, but as the elephant descended both BeBe and I started slipping forward until our feet were on the elephant's back instead of on the foot brace of the passenger seat. I felt like I was going to slip right through and down onto the elephant's back. Consider this one grandmother who was not a happy camper.

Once the elephant reached the shallow river, we were able to straighten ourselves back correctly in the passenger seat. Going up the steeper opposite bank wasn't a problem. The mahout turned and told us several times to move either right or left in the seat; obviously attempting to get the weight properly distributed. The seat continued to slip throughout our entire ride.

We progressed down that side of the river for a distance, then angled back across the river to the original side. The mahout was having difficulty controlling our elephant. The elephant would stop and refuse to move (like a darn mule) and he would try to go off the beaten path. He just did not want to follow all the other elephants on this long walk. We made it up the opposite side of the river on a steeper bank. 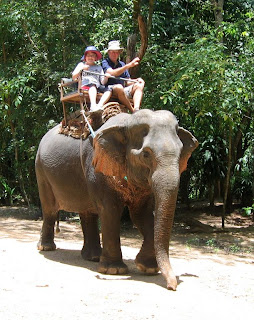 Here there were a couple of vendor stands selling bananas and sugar cane sections to feed the elephants, but I did not have any money to buy any. Maybe the lack of treats at this point of the walk is what pissed off our elephant, because from that point onward he was very contrary and refused to obey the mahout. The other elephants continued on the walk and our elephant walked away down near a building and stood in the shade......while BeBe and I wondered what the heck was going on.

And that is when we received our first shower of elephant snot.

The elephant would gather liquid in its trunk and then turn its head to the right and put its trunk up toward us and blow hard.......covering us with a shower of what could only be described as elephant snot. This happened over and over again during the remainder of our walk.

Near the end of the walk the path diverged. All the other elephants had walked down the left path with the gradual slope. Our elephant instead decided to take the short cut down the steep slope to the right. This was not pleasant. In fact, it was downright scary and very uncomfortable. Our passenger seat slid forward until we were up against the back of the mahout. BeBe and I felt like we were sliding right over the head of the elephant and we were holding onto the seat for dear life. BeBe started crying because she was so frightened and was certain she was going to die falling off an elephant and getting stepped on by the big elephant -- like the baby elephant a few years ago at the Houston zoo that was killed when its mother stepped on it. We did eventually reach the bottom of the steep slope and then it was only a short walk down a paved road to the platform where we were allowed to get off this damn animal.

By this time we had been sprayed by elephant snot at least 20 times and our clothes were wet with it. Oh, I enjoyed this elephant ride ever so much!

Bill said our elephant had blood showing in several spots where our mahout had tried to control the elephant with his hook. This whole ordeal was very upsetting. Elisabeth said she liked the Mae Sa Elephant Camp much better because the elephants there were better trained and weren't tortured like they were in this Mae Taeng camp. I agreed with her. The elephants at Mae Sa seemed much happier. Part of this might be because each elephant was assigned a particular mahout. In the Mae Taeng camp it appeared that the mahouts worked with different elephants more often and not so much with their dedicated animal. This can't be good for the elephants because they can't bond with their trainer as well. At any rate, I was so glad to be finished with elephants at this camp. 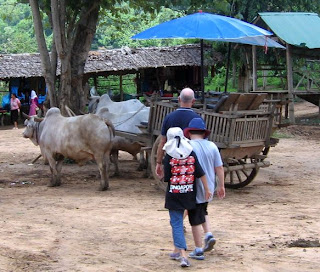 Next was our ox-cart ride back to the main camp. Funny thing is that our oxen looked exactly like Brahma steers......or Bremmers as they are affectionately known in Texas. These looked nothing like any oxen we had seen before. All of the ox carts looked like they were being pulled by either Brahma steers or Brahma heifers. While riding the ox-cart back to the main camp we passed an old elephant that was chained beneath a thatch roof. The ankle of that poor animal was deeply scarred and indented by the chain ring. There is no excuse for treatment like that. 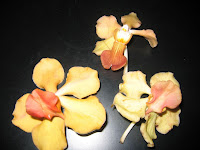 After a leisurely buffet lunch our next stop was an orchid farm. Gorgeous flowers. We didn't take any photos inside the orchid farm, but here is a shot of the small orchids they pinned onto our shirts as we entered.

We returned to the hotel for another swim in the pink pool. I will never understand why anyone thought a pink swimming pool was a good design idea; blues, greens, white or even black looks so much better. Then it was back to Miguel's for another Mexican dinner. We were going to eat Mexican food until we were burned out since there is none available in Malaysia.

Email ThisBlogThis!Share to TwitterShare to FacebookShare to Pinterest
Labels: Thailand