A state of limbo 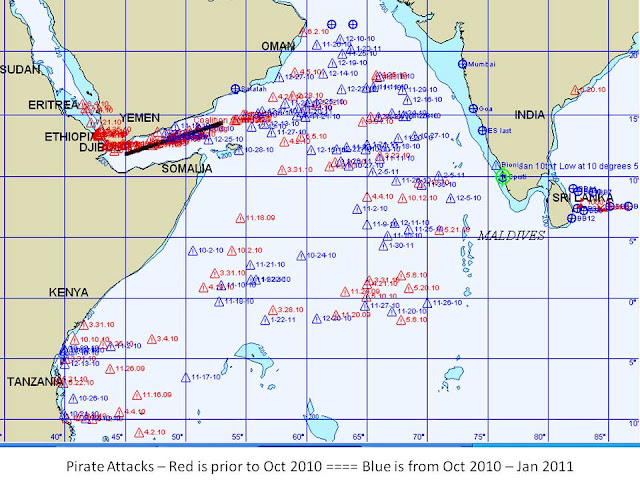 What to do? What to do? Do we dare go up the Red Sea with all the current problems in Egypt? If so, by what route? Or do we change plans and go around Capetown? Or possibly do something else - like try to ship the boat to the Med? We do not want to turn around and return to Thailand/Malaysia. 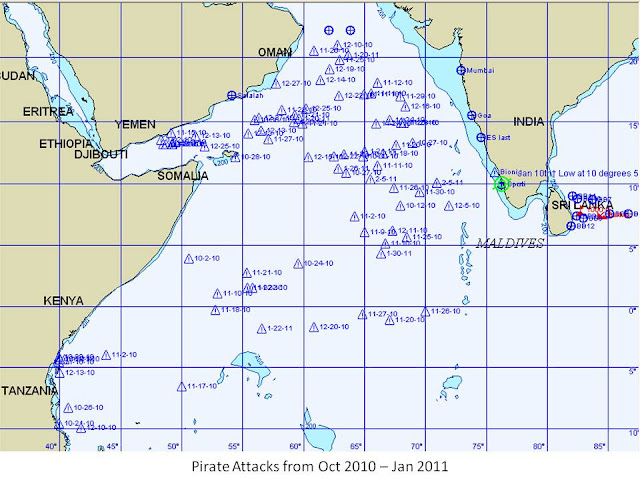 We have been tracking pirate attacks in the Indian Ocean since we were in New Zealand. Started doing this about February 2009. These are shown on our electronic charts in red. Last month the Somalis got unusually active. We have learned that the international piracy website does not reflect all pirate attacks. MARLO has more accurate information. This week Bill plotted all the pirate attacks that happened November 2010 through last week. These are shown on our electronic charts in blue. The reds and blues seem to cover the entire northern part of the Indian Ocean. This is getting ridiculous! 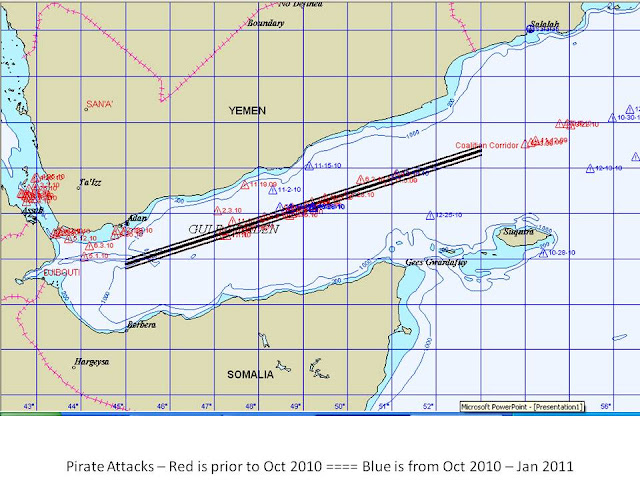 At least we are in a much better geographic position than the 30-35 boats that went to the northern Maldives. Those folks really have a challenging time before them. At least we are docked in complete comfort and safety in Cochin. Our Indian visas are good through 26 April 2011, so we have plenty of time to assess the status of Egypt and pirate activity. The longer we wait, the more difficult weather-wise it will be for us to go north in the Red Sea - if that is where we end up going - but we can deal with the stronger winds if necessary. The worst possible scenario is for us to proceed and then have the Suez Canal close while we are in the Red Sea.

So, we are sitting in Cochin for now and hoping the Egyptian situation gets sorted out quickly. If it looks too questionable, we can stay in India until our visas expire; then go to Chagos for 28 days; then the seasonal weather should be correct to sail farther south to Madagascar. That was our original plan when we left Panama. Along the way we changed our minds and decided that the Med would be more interesting. The Med is still our preference; but going to Madagascar would also be okay. Just not our first choice.
The other option might be to ship the boat to the Med. We will be investigating that possibility this week. We already know that a Sevenstar ship will be going from Hong Kong to Turkey via the Red Sea, with a possible stop at Sri Lanka around mid-March. Maybe they will also come to Cochin to pick us up. Some of the other cruisers have a pride thing about sailing a complete circumnavigation on their own boat bottoms. We don't care about that at all. Even if we ship our boat up the Red Sea due to political unrest, we will still consider that we have completed a circumnavigation once we return to the Caribbean. Call us liars; we don't care. (Bill would like to stay on BeBe aboard the transport ship, but that will be at the discretion of the ship's captain. I am not so crazy about that idea.) And, yes, we do know that one of the yacht transport ships was captured by Somali pirates on 22 January 2011. In fact, putting S/V BeBe aboard a yacht transport ship greatly increases the chances of piracy. The pirates have not attacked a pleasure yacht in more than 6 years in the shipping lanes. They want big ships because that is where the money is. This gives us a lot to think about and we need to do a lot more research of the various options.
In the meantime, friends on S/V ESTRELLITA, S/V SAPRISTI, S/V B'SHERET and M/V DORA MAC are all docked here at the marina in Cochin. And I think S/V ESPIRIT is enroute from Sri Lanka and should arrive tomorrow. ESTRELLITA and SAPRISTI have turned around and abandoned all plans of going up the Red Sea. They will spend at least another year in the Thailand/Malaysia area; then probably go around Capetown. B'SHERET probably will also go south later this year, or they might ship their boat to the Med. DORA MAC also might ship their boat to the Med. Like I said, we are all in a state of limbo. At least we are not being rushed to make decisions and are enjoying where we are at the moment. The 10 of us are going out for a nice dinner tonight at The Grand Hotel. A real dinner party!
But all family and friends who had planned to meet us in the Med next summer should hold off buying any non-refundable tickets. We still hope to be in the Med by late May, but it is looking very iffy right now.
Posted by CW Bill Rouse at Sunday, February 06, 2011