Awarded Sailor of the Year

(Maybe that should be Sailors of the Year.)

Recently we received notification from the editor of magazine Sailing Today that we have been voted the winners of the Sailing Today Awards 2016 Sailor of the Year category.

His note stated that this information was under embargo until 17:00 UTC, Friday 16 September when the awards winners would be officially announced at a champagne ceremony at the Southhampton Boat Show.  Therefore, I am writing this blog posting and scheduling posting for that appropriate time.  The awards winners will be announced in the November issue of the magazine which will be published on 30 September 2016.

Sailing Today grants many awards each year for a variety of gear and accomplishments:

Here is a link to the nominees for the Sailor of the Year award:

Reading the accomplishments of our 'competition' made us wonder why people voted for us!
Rest assured, we are appreciative of this unexpected award!

Several friends and family members suggested that possibly my blogging about our travels for the past 11 years might have had an impact on voting numbers.  This blogspot has had just under half-million views since I moved the previous blog onto this format in March 2009. I have deliberately not monetized this blog and a number of people have told me that they appreciate that this blog does not contain advertisements and no solicitations for donations.  Or maybe the voters were other sailors we have met over the years and had nothing to do with this blog.  T'is a mystery --- but thanks to all who voted for us!

Bill arranged for Lu Mitchell Heikell to accept the award in our stead since it was impossible for us to attend the Southhampton Boat Show this year due to our son's accident.  We first met Rod and Lu in the Kingdom of Tonga in 2008.  The last time we saw them was when we were anchored next to one another at Darwin, Australia in September 2009.  Rod Heikell was honored by Sailing Today with a lifetime achievement award at the same award ceremonies at the Southhampton Boat Show.  Thank you so much, Lu, for accepting the Sailor of the Year award for us.

Thanks also to friend Jake Angelo for helping us make this short video of acceptance which was shown at the awards ceremonies at the Southhampton Boat Show.

Email ThisBlogThis!Share to TwitterShare to FacebookShare to Pinterest
Labels: Sailor of the Year Award

Summer is over / Trip to Houston

Summer was over and time for the grandchildren to return to Texas before we knew it.  We had hoped to take one of the turtle watching tours to see the giant leatherbacks either laying eggs or see the tiny hatch-lings scooting across the beach and into the sea.  But that trip never materialized for a variety of reasons.  First there was a health problem in tour operator’s family and then there were not enough other cruisers to join us for this outing.  Jesse James cannot run this tour for only 4 people unless he charges a high fee, and he did not want to do that.  Sorry that Elisabeth and Damien missed seeing the giant turtles or the tiny babies.  Bill and I did the tour on Grenada years ago so we did not miss anything, but it would have been nice for the kids to see this wonder of nature.

The taxi to the airport for flight to Houston picked us up at 04:30 so we opted to stay in Crews Inn Hotel the night before departure.  We have a routine of preparing BeBe when leaving for weeks or longer and we did not want to do that in the middle of the night.   I had already emptied and defrosted all the freezers
and refrigerators.  When leaving the boat we run fresh water through everything that normally uses seawater -- the air-conditioning systems, heads and hoses, generator and engine.  That fresh water kills any marine growth or creatures that might have found their way into those hoses and systems.  This is not necessary but is something that we have always done when leaving the boat for longer than a week or so.

We had booked a large van to accommodate all our excess luggage for this flight.  Since we are selling the boat it made sense to take advantage of flying with the 2 grandchildren and max out luggage limitations for this flight.  And did we ever!  The 4 of us each had 2 large checked bags, plus each had one rolling carry-on bag and each had a backpack.  That made for a lot of luggage!  Because we had so much luggage it was decided that both our sons would meet us at the airport in Houston with their largest vehicles.  And this is when the problem happened.

As so often happens we were delayed in luggage collection in the Customs section of foreign arrivals at the airport.  Because it had been so long since the flight arrived and we were not yet out in the arrival area, Trey decided to step outside to see if by chance we had walked through the crowd already and were waiting for them near the cars.  There was a dark gray curb next to a dark gray driveway, and in the darkness and shadows contrasted with the sunlight nearby he did not see that curb.  This caused him to trip and shatter his kneecap.  He said it sounded like a gunshot when he fell full-weight onto that 1 knee.  A cart attendant said that Trey was the third person to fall in that exact spot in the past week.  So this is a known safety hazard.  The airport management really should have a stripe painted onto that curb!

Trey’s patella was broken into 3 sections, with the middle section slipping down behind the lower section.  Ligaments to thigh quadriceps were severed as well as ligaments to lower leg bone also severed.  The kundles also were sheared off.  This was a very severe break.  He had to wait 9 days for the severe swelling to reduce before surgery to screw and wire the kneecap back together.  The doctors placed him into an immobilizer brace for those 9 days and he was in a great deal of pain.  After surgery the leg was placed into a fixed brace locked at 180 degrees—straight leg.  The orthopedist wanted the leg to remain locked straight for 5 or 6 weeks before slowly beginning deflection 10 degrees each visit.  Supposedly, by 3 November his leg will once again be capable of moving to 90 degrees.  And then the fun part of physical therapy begins.  What an ordeal!!

Because of this accident Bill and I extended our visit to Houston.  Rather than return to the boat on 1 September as originally planned, we will return on 21 September.  Trey needed help until he could regain better mobility and stability of movement.  He has a walker and now could move from bed to recliner unassisted after the first 3 weeks post surgery, but still needed someone to prepare meals and fetch drinks.  He has diabetes; healthy and timely meals are critical; it wasn’t like someone could prepare a sandwich for him before heading off to school and work and leaving him alone all day.  I am glad we decided to remain another 3 weeks to allow him time to gain more movement and become less dependent on others to help.  He tries sitting at his home desk each day and is slowly increasing the time he can stand that.  He is progressing nicely and hopes to improve to the point that he will be able to work from home next month.  Thank goodness for the FMLA (Family Medical Leave Act) which provides him with employment protection until 25 October.  He has disability insurance through his employer.  Those 2 things are saving graces when someone sustains an accident such as this.  It is painful not only physically but also financially.

Extending our stay in Texas also had other benefits for Bill and me.  It afforded us more time to fix up our little bungalow in Galveston.  Our tenant had died unexpectedly in late June.  We are leaving the home as rental property through the remainder of 2016; changing status to be our homestead effective 1 January 2017.  Since we will be absentee owners it seemed best to retain the property manager for the remainder of this year.  He has subcontractors to effect repairs should any damages or accidents occur during our absence; although, I seriously doubt anyone would want to rent the home for such a short time period.

We have taken this opportunity to have the flooring replaced throughout the home.  And replace the aging HVAC system.  A gas line has been run and a meter installed; I am so looking forward to replacing as many of the electrical appliances as feasible with new gas appliances, but those will wait until we move in next year.  The front steps have been replaced (remember—this is an elevated home in Galveston; there are always plenty of exterior steps).  Soon the exterior will be pressure washed and repainted.  And a new security alarm system has been installed.

We have reclaimed some of our old furniture from various relatives, as well as some kitchen things.  Bill’s brother John has donated numerous things to set up housekeeping in this little bungalow.  There are enough furniture pieces in the home now that it would be possible to rent it furnished for the next 3 months should someone be in that market.  Highly doubtful.

It was funny when I unpacked the crates labeled ‘kitchen’ which I had loaned to Bill’s sister 11 years ago.  I found exactly ONE lid for a pot.  No pots or pans or skillets --- just 1 pot lid.  Good thing I am keeping those good German-made Silit pots and pans currently on the boat which I purchased a couple of years ago!

Bill and I are getting anxious to return to BeBe.  We do not like being away from the boat for such a long time, especially when we do not have trusted friends there to report any problems that might occur during our absence.  We have spoken with the dock master at Crews Inn and he says BeBe is fine.  Bill emailed the guy who recently painted our deck stripes white and he also checked the boat and said all is fine. 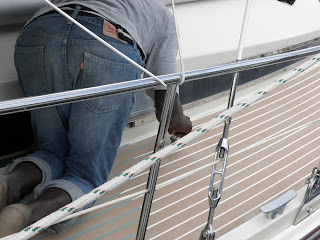 Oh, did I forget to mention that?

Yep, the deck stripes on BeBe now are ivory colored.  A new color for the new buyers.