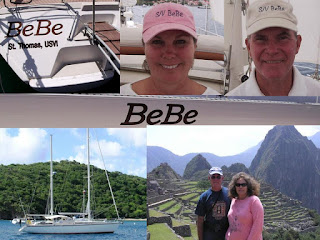 We are Bill and Judy Rouse from Houston, Texas.  Here is the story of how we became full-time cruisers -- or yachties as we were called when visiting New Zealand and Australia.

After a short stint working for the government, Bill spent most of his working years in the manufacturing business in one position or another, from factory sales rep to president of manufacturing factories; plus a few years of owning a lucrative private investigations firm (white collar crime, not the "follow-my-husband" type assignments); and a few years in the mega-yacht loose-furnishings business and high-dollar design business; as a financial consultant; and finally as a CFO.  His career was quite varied.

I worked as a legal secretary back when that position still existed; clerical work in the Pentagon; and as an accountant for decades; plus I owned several small businesses over the years --  the latest of which had been a computer shop co-owned with our 2 adult sons.  As you can see, both Bill and I have always had varied interests and a sense of being independent.  That seems to be true of the majority of cruisers we have met during our travels.

We are native Texans.  We married on September 6, 1969.  We have 2 adult sons (Trey and Aaron), 2 wonderful daughters-in-law (Kristina and Lynn), and 4 grandchildren (Zachary, Elisabeth a/k/a BeBe, Damien and Rose), plus one college-aged step-grandson (Sebastian).  All of them live in Houston, Texas.  So you can see where our leaving Houston to live on a boat was a major life change for us.  It was hard to leave the kids and grandkids.  But, what the heck, they have full lives and little time for us old folks anyway.  Figured we would miss them more than they would miss us.

Bill was working himself into an early grave in that very high-stress CFO job when I decided it would be great fun to spend a few years cruising the Caribbean.  I really wanted him out of all that job stress.  At that time we owned a Beneteau 463 that was in the Moorings charter fleet in the British Virgin Islands and scheduled to phase out in June 2005.  We knew the Beneteau (with many modifications) would be a good boat for cruising the Caribbean.  The Caribbean was really our home sailing grounds for the past 20 years.  We never had any desire to own a boat on Galveston Bay, so we sailed the BVI 3 or 4 times per year on 2-week vacations.  During a trip in March 2005 to reserve a dinghy for when the Beneteau phased out of Moorings, we chanced to anchor in St. Martin next to a beautiful Amel.  Bill went over and introduced himself to the owner, and we left that boat with a handshake agreement that if they ever decided to sell they contact us first.  Two months later we purchased that Amel and our cruising plans instantly changed.  An Amel could take us anywhere in the world in comfort and security.  Why limit ourselves only to the Caribbean!

Bill had a very stressful year ahead in his position of Chief Financial Officer for a small publicly traded biotech firm.  He renewed his employment contract with an ending date of April 28, 2006; and I got busy figuring out what to do with all our possessions.  We listed our home for sale at a price 40k higher than we thought it would sell for -- after all, we had plenty of time to sell the house and could always lower that price.  We were supremely shocked when 24 hours later we had not one but two contracts for the full listing price!!!  Location truly is everything in real estate.  One of the hopeful purchasers was a married couple of medical doctors who worked in the Baylor Medical Center just 3 blocks from our home.  They wanted our home for rental property.  And they were willing to rent the home back to us for a mere pittance!  Obviously, we signed the contract to sell the home to them!

This gave me over 9 months to sell all our possessions while Bill finished his employment obligations.  I sorted through 37 years accumulation of and other miscellaneous household belongings.   Had a series of garage sales to eliminate the clothing and unwanted "stuff."  Man!  Had we accumulated "stuff."  We were determined not to rent a storage unit; everything had to go.  We opened an account with Connections in St. John, USVI; and shipped 23 boxes of books, clothing, tools and things we wanted to keep on the boat.  Lucky for us, the US Post Office considers St. John to be domestic and the shipping costs were quite reasonable.

We moved aboard our 16-meter (53-ft) Amel Super Maramu 2000 on May 1, 2006; and began cruising the Caribbean.  When we had purchased S/V BeBe the prior year she was berthed in Soper's Hole, Tortola in the British Virgin Islands.  It was pure chance that we had anchored next to her in St. Martin.  The previous owner lived on Cape Cod and visited the Amel only 2 weeks every 6 months.  At the time we purchased our wonderful Amel, the 28-month-old boat literally smelled like a new car when we opened the companionway!

Since moving aboard the boat, we haven't looked back.  Eventually we hope to return to the Caribbean with intentions of sailing that area until we are either physically incapable of doing this any more, or the money runs out, or it just isn't fun anymore.  Who knows how long that will take!  After more than 9 years of living aboard full-time and cruising more than 30,000 miles, we consider S/V BeBe to be our home and cannot imagine becoming landlubbers again.

We have loved visiting other countries and learning about other cultures.  Neither of us can imagine returning to the consumption-based life in the US.  We know it will happen eventually, but hope that is way in the future.  There is something so freeing about living on a boat.  If you don't like where you are, just weigh anchor or slip the dock lines, raise the sails, and move on until you find a place more to your liking.  We love not being tied to one geographic place and have no desire to increase our possessions just for the sake of buying more "things.".

We are hoping to complete our circumnavigation when we cross the Atlantic from La Palma to Martinique in January 2016 and then continue to goof off for years around the Caribbean.