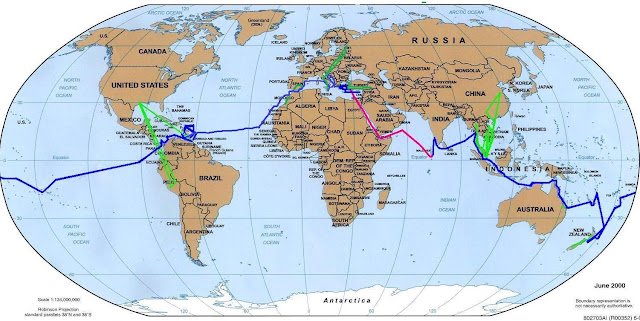 The blue lines represent routes we sailed.  The green lines represent land and air travel. The red line represents the track of the BBC Everest which was the transport ship that carried BeBe through the pirated waters of the Indian Ocean, Gulf of Aden and Red Sea.   We have completed our circle or circumnavigation and are in the Caribbean.

A few of the statistics of our circle of this earth: (We began tracking these statistics of 15 April 2008 when we transited the Panama Canal; these stats do not include 2006 and 2007 in the Caribbean.)

One of the most enjoyable aspects of cruising around the world is visiting many different countries and cultures; and not all places are accessible via boat.

We realize that we will not have met the traditional mariner's and some arm-chair sailor's definition of a circumnavigation, but we and S/V BeBe will have physically encircled the globe via ship or airplane.  Call that whatever you like.  For simplicity, we are using the word circumnavigation.  According to Merriam Webster's dictionary, the definition of circumnavigate is:

One can circumnavigate an island.  Or a continent.  Or our planet Earth.

By the way, history books credit Ferdinand Magellan as being the first person to circumnavigate:

Yet Magellan died in the Philippine Islands, which means he actually sailed only a little more than half-way around the world .  His navigator should be the one credited as being the first person to circumnavigate, yet that honor is credited to Magellan.

There has been lots of conversations on the various online sailing forums as to what constitutes a circumnavigation.  Some purists claim that it does not count if one transits the Panama Canal or the Suez Canal.  That only rounding the Cape of Good Hope and Cape Horn qualify one as a circumnavigator.

We do not care.  Got that?  We do NOT care.
Use whatever label you want to describe our route around the globe and our methods of traveling that route.  Labels mean nothing to us. .  We.do.not.care.

This adventure of ours has been to see the world and get to know her people, not to sail a specified route in order to qualify for a label.  If that is your goal, go for it; but keep your criticism of our use of the words circumnavigate and circumnavigation in perspective.  We transported BeBe through the Somali pirates and Arab Spring revolutions occurring in the countries bordering the Red Sea in 2011 and we will always believe that this was the correct decision. Sailing through that region at that time would have been too dangerous and foolhardy.  We regret not seeing the Red Sea, but our decision to transport at that time was one of the smartest things we have ever done.

We returned to the Caribbean in January 2016 and we will say that we have circled the world. And that will be exactly what we have done; the majority of the distance by sea and a short distance by airplane.  For simplicity, we might use the word circumnavigation rather than the phrase 'circled the world' and if that bothers anyone then we suggest that person needs to do a bit of introspection to determine why he or she is bothered by anything we say or do as it has no affect on anyone except ourselves.

It is anybody's guess where we go from here!