Zachary arrived right on time Tuesday morning and flew with his Papa Bill from Brisbane to Mackay. Also brought us a duffel bag of those never-ending boat parts. His first day was lots of fun for all of us. This was the first day we had a rental car and got out of the marina to see the area. We had a great poached salmon dinner on the boat and then made a trip to the trash bins to dispose of the smelly fish bag and papers. And that is when the accident happened.

It was low tide, which is quite substantial here in this area of Australia, and the ramp to the floating concrete docks was very steep. As we were walking back to the boat Zach, like all boys, just had to start running down the steep ramp. Luckily there were 3 men walking abreast of one another about 15 feet from the bottom of the ramp, so Zach had to slow to a stop so he wouldn't run into them. As soon as they reached the bottom of the ramp and turned off onto the first finger pier then Zach started to run again. So he had only run a very short distance to the connection to the floating concrete dock. Next thing we knew he was fallen in lump onto the concrete dock and wasn't moving at all. We got to him and he said the only thing that really hurt was his arm. At least he had been slowed down by the men walking in front of him; otherwise, his velocity at the time of the fall would have been greater and he likely would have sustained more injuries. 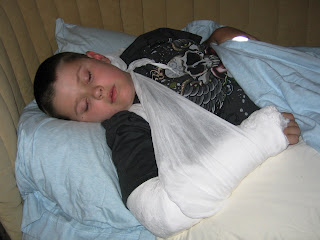 I felt along the bones in the forearm and it was very, very obvious that at least one bone was broken -- completely separated, not just a crack. I stayed with Zach and stabilized his arm while Bill went back to our boat to get a splint out of the medical kit. Bill soon returned with the father of one of the other kids on the dock, but no splint. So I went to the boat and got a SAM splint and roll of wide painter's masking tape. This worked perfectly for taping the splint to the bottom of Zach's arm to keep it immobilized. The ER workers liked this tape because they could pull it off and examine the arm without removing the splint and then replace the tape. Worked much better than normal medical tape which would have required replacing each time someone examined the arm.

We would never have found the hospital with the father of the other kid. The plan was for Bill to take the man back to the marina while I stayed with Zach at the ER, but it turned out that this break was so bad that Bill wanted to stay with Zach and me. So the man's wife ended up coming to the hospital to pick him up. Thanks very, very much to Jim & Michelle for their assistance during our emergency. Jim & Michelle are Australians living on a boat with their 4 children directly across the dock from us. They are preparing their boat for cruising but it will be a long time yet before they are ready to depart.

Both bones in Zach's right arm were broken about 3-inches above his wrist. The large bone was separated by more than an inch. The smaller bone was separated by just a tiny bit. This was a fairly serious break and the ER doctor (Dr. Mark) said that if this had occurred during the daytime then Zach would have been sent up to surgery and have pins installed. The normal night-time procedure would be for the patient to be sedated until morning until this surgery could be scheduled. But Dr. Mark is of the opinion, which we totally share, that putting a kid this age through general anesthetic and installing various bits of metal into his bones was to be avoided if another method of remedy could be found.

Dr. Mark called in the chief of anesthesiology and the chief of orthopedics for consultation. All 3 doctors agreed that the condition of the broken bones and considering Zachary's age that he was a perfect candidate for a different type of procedure and that surgery very likely could be avoided. This procedure is not always successful and they would not attempt it on a very active younger child and would not attempt it on a teenager, but Zachary was the perfect age and had the perfect temperament to work with this procedure. Zachary had charmed all the nurses and doctors with how well he was handling the pain and still remaining very polite and civil with everyone. He also impressed them with how intelligent he is and by the questions he asked. Those people who know Zach will know what a charmer he is.

An IV had already been inserted on Zach's left hand, and a nice dose of morphine was much appreciated. After the morphine kicked in then they also inserted an IV into his right hand -- the injured arm. We were all moved to a "Procedure Room" where Zach had 3 doctors, 2 nurses and the x-ray technician all working on him at the same time. They put a pressure cuff on Zach's upper arm. Then they made Bill and I stand outside the room but we could watch. They injected a drug called Prilocaine into the IV in the hand of the injured arm and held the arm straight up for 3 minutes. The pressurized cuff kept the drug from entering the body trunk and kept it in the arm. After a few minutes the arm began to swell and turned mottled red and purple. The arm below the pressurized cuff was completely numbed.

Now the orthopedist started working the bones back into place while the low-dose continual x-ray displayed exactly where the bones were moving. This was interesting as long you could remain unattached. It was horrible when it is your family member on the table an that arm started moving in non-natural alignment positions. Really weird to see a hand and part of the arm turned at angles to the rest of the forearm. Gosh that looked horribly painful!! It only took a few minutes and the bones were back into place and they started making a cast to hold everything in proper alignment. Within 15 minutes from the time they started this procedure they released the pressurized cuff and the cast was completed. Supposedly the Prilocaine has only 20-minutes of 100% effective strength and then diminishes rapidly after that, so by now it was acceptable to allow the drug to circulate into Zach's body.

And Zachary was awake during the entire process. At one point the orthopedist told the x-ray technician to "cut that finger off" on one of the x-ray images -- meaning to crop the image without showing the doctor's finger on the arm. That got Zach's attention! He lifted his head, whipped his head toward that doctor, and asked just what finger they were cutting off. When reassured that they were not talking about cutting off his finger, Zach relaxed and drifted off to sleep with the assistance of the second dose of morphine.

By midnight we were back at the boat and Zach was soon asleep. A script of pain pills helped him through the night. The next morning we went back to the hospital for a follow-up x-ray and examination. They wanted to be absolutely certain that no soft tissue was caught between the ends of bone and that the bones had remained in perfect alignment overnight. Everything was perfect. We go back to the hospital on June 27 for another follow-up x-ray and they will remove this very heavy plaster full-arm cast at that time and replace it with a lighter-weight regular full-arm cast. Then several weeks after that they will do another x-ray and then put on a short cast. 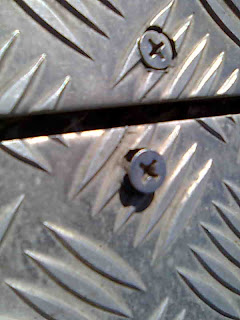 Early the morning after the accident Bill went back to "the scene of the crime" to try to ascertain what might have caused Zachary to fall. Right in the path where Zachary fell was a loose screw in a metal plate in the concrete floating dock, right at the bottom of the ramp. Bill brought this loose (raised) screw to the attention of marina management and was told that they will provide us with a rate adjustment because of this accident. We will see how that plays out.

The ER doctors said that we can to the later follow-up visits at other hospitals as we sail northward toward Cairns; we just need to do the first follow-up and cast change at the hospital here in Mackay. That is very good news as this accident has obviously changed our departure plans from Mackay. We had planned to leave this Saturday but are now delayed until Sunday, June 28. That will leave us about a month to sail approximately 450 NM to Cairns. Our youngest son and his wife, our granddaughter BeBe and the new baby will be meeting us in Cairns around August 1st, so we do have a date deadline for arriving in Cairns. 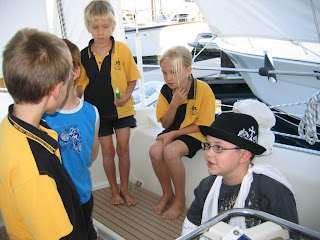 Zachary is handling having a broken arm with his usual aplomb and easy good nature. The other kids on the dock come over and play in his room. The really bad thing is that Zachary is right-handed and it is the right arm that is broken. He keeps saying that having a broken arm isn't so bad but that he wishes he had broken the left arm instead. But he is adjusting quite well. Heck, he even learned to play his DS left-handed today.
Posted by CW Bill Rouse at Thursday, June 11, 2009

Email ThisBlogThis!Share to TwitterShare to FacebookShare to Pinterest
Labels: Australia