November 27, 2009, Friday
One day last week Teh surprised us with the gift of a wok with a lid and steamer tray. We had discussed at lunch one day the fact that I had given Bill's sister my old large wok (which also had a lid and steamer tray) when we moved aboard because it was too large to fit in the boat cabinets. Teh called from the store to confirm the width of our boat locker doors so he wouldn't buy one that was too big. He knows how much both Bill and I enjoy fish steamed the Malaysian way. The wok Teh gave us fits perfectly in a drawer beneath the settee. Now we can prepare this delicious dish at home on the boat. In fact, sometime before we fly home for the holidays next month I will steam the last portions of fish in our freezer. We still have some Spanish mackerel that we caught, and that should steam nicely. When we leave the boat in a marina slip to travel for a few weeks, we always turn off everything except the battery charger. So the freezers/fridges must be empty before we fly home. 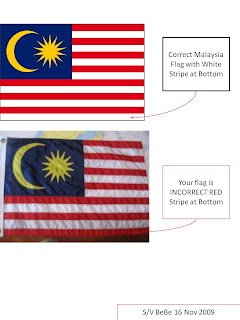 Yesterday Teh surprised us with some Malaysian flags and some great fly swatters. Flies are a constant problem here. We had commented at lunch one day that the Malaysian courtesy flag that we had purchased from Bluewater Charts & Books in Florida was not correct. The proper Malaysian flag looks quite similar to the American flag. It has horizontal red and white stripes of the same color as the US flag; and a dark blue rectangle in the upper left corner with a crescent moon and a star-burst sun where the US flag has the 50 stars. Malaysia has (or had, I'm not sure if this is still true) 14 sultanships. The Malaysian flag has 14 stripes, 7 red and 7 white; and the star-burst sun shape has 14 points. Both the 14 stripes and the 14 points represent the original 14 sultan regions of Malaysia. In the USA, our flag has 13 stripes which represent the original 13 colonies. Our flag has a red stripe on top and a red stripe on the bottom. Because the Malaysian flag has an even number of stripes, it has a red stripe on top and a white stripe on bottom. Anyway, after that very long explanation, the very expensive Malaysian courtesy flag we purchased from Bluewater for $74.95 USD was missing the bottom white stripe. It is a very well-made flag; but it is not correct for this country. We needed to buy a correct Malaysian courtesy flag. We contacted Bluewater and they agreed to give us a refund when we ship the incorrect flag back to them. But we were having difficulty finding a replacement flag locally. Teh remembered that conversation and went to the trouble to find us a courtesy flag. In fact, he brought us a streamer of many Malaysian flags. We cut the strip holding the flags together and that left strips of fabric to tie the flags to a halyard. We split this bonanza with S/V B'Sheret. These flags are made of heavy plastic and we have never had a plastic courtesy flag before, but this worked perfectly. And we have several spares if the first flag begins to wear in the wind. 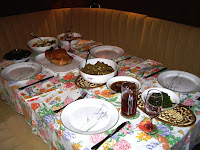 Yesterday was Thanksgiving Day in the USA. As there is only one other American boat in this marina at the current time, we invited them over for Thanksgiving dinner. The supermarket did not have any turkeys so I opted to roast a chicken instead. Probably could have found a duck but I have never tasted duck and have no plans to develop a taste for that bird. Since this is not USDA country, I followed my cookbook (circa 1930) and cleaned it the old-fashioned way by thoroughly coating in baking powder after first washing. Then thoroughly scrubbed off the baking powder and used lots of lemon juice to clean the interior cavity. Rather than do stuffing, I stuffed the chicken with lots of celery and small cut limes and seasonings and trussed it. This seemed to work well as it tasted pretty good. 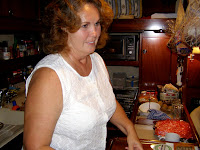 As I cooked in the hot kitchen, Bill enjoyed a few glasses of wine

. I cooked the roasted chicken, my famous cornbread dressing, gravy, green peas, candied yams, and a homemade fresh apple pie. Our guests brought the wine, a delicious cold vegetable salad, fresh fruit salad and cranberry sauce (canned, from Panama). Turned out to be a fairly traditional Thanksgiving dinner. Amazing since many of those ingredients/foods are not available locally. We cruisers do have well-stocked larders. 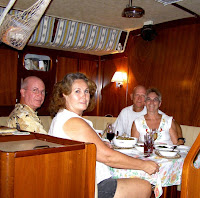 We enjoyed dinner with Michael and Linda from S/V B'Sheret. Bill and I have a lot to be thankful this year. Both of us still have good health even though we are in our sixties now. Our cruising budget is holding up to our projections and Bill is now collecting Social Security to supplement that budget. Our Amel boat has suffered none of the various maintenance issues faced by all the other cruisers we know. All our family members are healthy and still employed during this time of financial uncertainty. And we look forward to seeing them in just a few weeks. Life is good!

November 28, 2009, Saturday
Both of us awoke today with scratchy throats and feeling rather crappy, though not really sick. We are taking it easy and staying inside our cool boat and drinking lots of vitamin C juices and sipping soups and hot teas while it rains. I was playing jigsaw puzzles on the computer in the forward cabin when we heard and felt a crash. Went running topsides to find a a sailboat crazily trying to get their sails down as they were being blown sideways into our bow and into the bow of the Japanese boat berthed on our starboard side. This boat did not have an engine and the wind was blowing about 15 knots straight into our bow.

Turns out this boat had left the slip directly in front of us on the next dock windward. They had put up both their mainsail and their foresail while still tied in their slip because they have no working engine. The wind caught their boat and blew it back toward our bow as their boat turned sideways in the wind. We yelled at them to get their dinghy running and to use it to move their boat off ours and the Japanese boat. The marina staff came running down and we all used fenders to keep the boats apart. Marina staff quickly came in their large orange inflatable boats and towed the engineless sailboat away from the slips, where the 3 men on the engineless boat again raised their sails and departed the marina. Supposedly this boat is going out just to "assess" something on their boat and will be returning to the marina later today.

The Japanese boat sustained gel coat damage when that boat hit their anchor. Good thing the anchor was tightly tied into position or the Japanese boat would have sustained greater gel coat damage. Our boat sustained 2 scratched places in the brown fiberglass rub rail. We do not want money from the boat that caused the damage, but we do want them to repair these scratches. Hopefully, the scratches will compound out.

Another thing to be thankful for -- the damage could have been much worse than just a couple of small scratches.
Posted by CW Bill Rouse at Friday, November 27, 2009

Email ThisBlogThis!Share to TwitterShare to FacebookShare to Pinterest
Labels: Malaysia