Back to Malaysia again 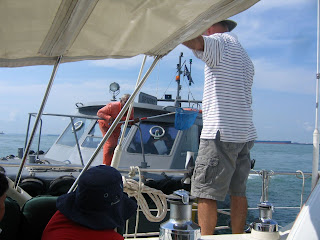 On Friday morning we cleared out of Singapore and departed One Degree 15 Marina. We motored the short distance to the Western Quarantine Anchorage and drifted until the Immigration officials arrived to stamp our passports outbound. They arrived after only a 10 minute wait, and we were soon on our way. The official small boat hovered nearby and the documents were passed in a net on the end of a pole. This works very efficiently except when it is raining or seas are rough. They are pretty good at doing this and almost never hit against your boat. Today was one of those calm days.

True to predictions, the weather was perfect.......a bit too hot and still, but tolerable with the breeze generated by motoring at 6-7 knots.

Both Zachary and Elisabeth take to this boat life like naturals. I let each of them drive the boat for a short time. There is just enough room for Elisabeth to stand in front while I sit in the helm seat so I can grab the helm if needed or help her make course adjustments. After all, the waters of Singapore are very busy with all the shipping traffic and one must stay extra vigilant here. She did very well. Her only shortcoming was that her attention is easily diverted. When Bill brought up PB&J sandwiches for lunch, she dropped her hands and walked away from the helm without a second thought about who was going to continue driving the boat. Of course I was sitting right there and grabbed the helm, but we kidded her about this for the rest of the trip.

Zachary is much too big to stand in front of the helm seat with anyone sitting there, so I sat sideways next to the helm while he drove. He did just fine, even when an cargo ship weighed anchor and went well in front of us and when another cargo ship motored right across our route in the not-too-far distance. 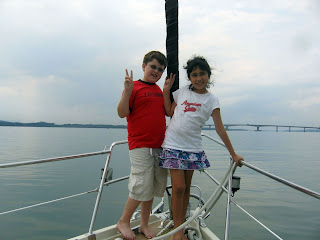 Soon we had turned the corner are were headed up the Johor Strait between Singapore and Malaysia. As we approached the Tuas Bridge (Second Link Bridge), we let the kids walk out to the bow and then lie down on the deck to watch the top of the mast as we went beneath the bridge. The highest clearance beneath the bridge is 25 meters. Our mast is 60 meters with about 1 meter of various antennas mounted on top. So there is no doubt we can clear beneath the bridge at even the highest tides. But it always looks much closer than it is!! Lying on the deck and looking up at the mast top as it goes beneath the bridge always gives the appearance that the mast will hit the bridge. Zachary took photos with his camera, but we don't have the cable for that camera to download to our computer. So, no photos of this optical illusion.

We arrived mid-afternoon after a total distance traveled of 31 NM. The staff at the marina were setting up an enormous projection TV screen for the World Cup starting that night, so there was no one available to drive us the very long distance to the port authorities for inbound clearance. Our clearance was delayed until Saturday morning.

Friday afternoon we were sitting near the cafe and Bill was chatting with the man in charge of the entire development. He said there were bikes for the kids to ride and we explained that all of the bikes were too large for the kids. He immediately called over the marina project manager and told him to go buy some bicycles for children. Wow!! We never expected that!

Saturday morning the marina shuttle van took us to clear in. Sure enough, no problems with the officials for not clearing in the previous afternoon. Nice for us that they were so amenable. 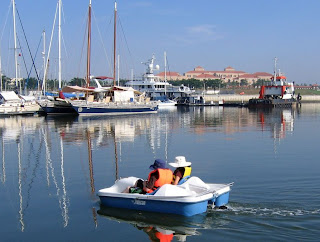 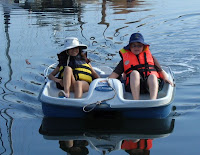 Saturday afternoon Bill put one of the pedal boats into the water and let Zachary and Elisabeth pedal themselves until worn out. This marina has a very, v 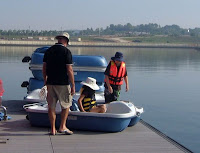 ery large enclosed area that is totally calm and protected. They have plenty of room to ride in the pedal boats or kayaks or rowing dinghy, with no worries of them getting caught in the currents of the strait outside the marina entrance.

Saturday night we met several other people at the marina cafe to socialize and watch the World Cup. Not that any of us cared one whit about Algeria and Slovenia playing soccer. While we chatted and snacked, the kid met another cruising boy whose mother is from Japan and father from New Zealand. Zachary discovered one of the new bicycles and the kids had fun riding around together. Elisabeth does not yet know how to ride a bike well, so she just ran after the 2 boys. Oh, to have the energy of a child again!

But this friendship with the Japanese boy was not to last long. On Monday after Zachary finished riding the new bicycle, he handed it over to the Japanese boy. That kid immediately took the bike back to his boat to keep it there solely for his use. Nice kid, huh? The marina allows people to take bikes to their boats and keep them on the dock. I think this is a bad practice and submitted a note to their suggestion box. Having bikes on the dock causes clutter and are hazards for tripping. Most marinas do not allow bicycles to be parked on the docks for this reason. Zachary was not happy because the only bike left that was the right size for him was the new pink one. No 9-yr-old American boy wants to ride a pink bicycle!! I explained to him that the pink-girl and blue-boy color thing was just for Americans. The Malaysians do not associate pink with girls. He wasn't happy about it, but if that was his only choice then he would ride a pink bike. He was convinced that the pink bike did not go as fast as the red bike (even though they are the same model bicycle). Boys!! 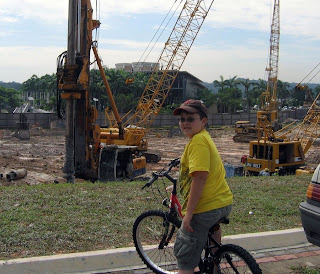 This went on for a couple of days and then Bill went to the Japanese boat and explained to the father that the marina bicycles are meant to be shared by everyone and that he hoped that the bike would be returned to the marina bike parking area so the other kids could use it also. I was somewhat annoyed by the whole deal because this little boy is much too small to be riding this bicycle in the first place. A child should be able to sit on the seat and place both feet on the ground; if his feet do not touch the ground while he is sitting on the seat, then the bike is too large. Being able to ride it by jumping on and pedaling but not being able to sit on the seat is not safe. At any rate, the father did return the bike to the marina parking area the following day. Now the kids are back to sharing time riding that specific bike. But I don't think they will be friends again.

We went to Night Market in Gelang Patah on Tuesday night. Both kids liked the roasted pork and the Thai pineapple rice we bought in the Chinese section across the street from the market. (We have learned that the food is much better from the Chinese vendors than from the Malaysian vendors.) Neither Zach nor BeBe were impressed with the small town. Elisabeth said it looked like a dirty dump place where people throw things away. I explained that this is their town and that is just the way they live. Pretty buildings and landscaping are not as important to them; functionality takes priority. Looking at the foods for sale in the Night Market must have impressed upon her that what I am serving her on the is the best she is going to find in Malaysia, because she suddenly switched from"I don't like that" and "I'm not eating that" to eating everything on her plate with no complaints whatsoever. She still refuses to eat white cheese. Like most American children, she thinks cheddar should be yellow. She refuses to believe that the only difference is yellow food coloring, even though it is the same brand as she eats at home. Zachary eats whatever is prepared for him. He wants to lose a few pounds this summer. In an effort to help him with that goal, he is eating each meal with chopsticks. This causes him to eat more slowly. He is getting very good at handling chopsticks. Elisabeth is also learning to eat with chopsticks, although not as a weight-control measure. 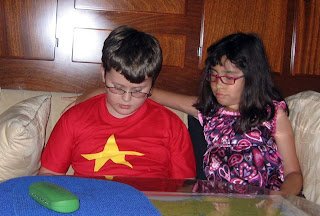 Yesterday it rained all day and the kids declared it to be Pajama Day. Both of them stayed in their pajamas all day long. Several times I heard one or the other say, " Pajama Day rocks!!" They loved lounging around reading, playing DS games and watching movies. It was nice to do nothing all day except read or whatever we wanted. 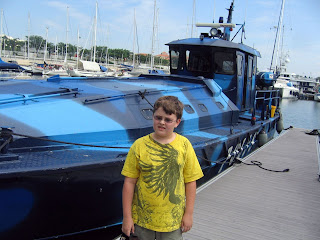 Today the sultan's boat is back in the marina. Neither kid was impressed by the presence of a sultan. They were more impressed with his orange Lamborghini Diablo parked in front of the marina office and with the camouflaged blue-on-blue police boat that goes 45 knots.
Posted by CW Bill Rouse at Thursday, June 17, 2010

Email ThisBlogThis!Share to TwitterShare to FacebookShare to Pinterest
Labels: Malaysia