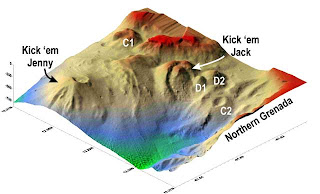 Tyrrel Bay in Carriacou is a place where cruisers sort of get lost. I don't mean physically lost because it is a small place and that would be impossible. I mean they sort of get lost in time. You anchor there with intentions of leaving in 2 days and find yourself still anchored in the same spot a month later and wonder where the time went. Part of this is because there are other cruisers anchored nearby and socializing becomes a daily event. There are several restaurants, nothing fancy but each one is okay in its one way. The pizza restaurant overlooking the bay is the most popular one. Even if you happen to not like pizza it is a great place for happy hour drinks with friends to watch the sunset. We saw some gorgeous red sunsets from here.

Carriacou was a new place for us in May 2006; had never stopped here on any of our previous trips south. We cleared in at Hillsborough and sailed over to Tyrrel Bay. Almost no one stays at Hillsborough very long. We met several cruisers in Tyrrel Bay, including Rick and Sue Johnston on S/V Panacea. Rick and Sue had stopped in Tyrrel Bay and liked it so much that they were still there 3 years later. They had started a company providing WiFi internet access to boats in Tyrrel Bay. A little niche market with all the cruising boats coming and going.

Rick helped Bill set up our SSB and Sailmail and Winlink and got it all working together correctly for the first time since we moved onto this boat. We had not been able to use the SSB for email for our entire trip south from the BVI, so we were very thankful for Rick's assistance. In return, we gave him a pair of handheld VHF radios. We had 4 handheld VHF radios on board and certainly did not need that many. Rick and Sue did not have any working handheld radio so this was a good trade-off for both our boats. 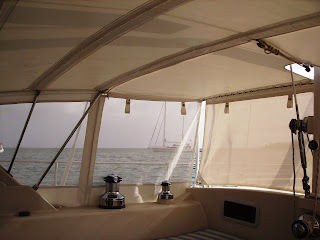 We returned to Carriacou in May 2007 and ran into several boats that we had last seen in Trinidad during summer 2006. It was really great to meet up with all these people and we ended up staying in Carriacou longer than we had planned (like so many others). While anchored in Tyrrel Bay we had a woman named Petra make shade panels for our cockpit. Petra is a German girl who does superb canvas and Sunbrella work. Petra made side panels out of 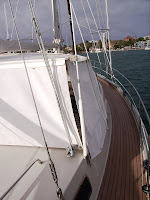 Sunbrella mesh and rear panels out of extra-heavy Sunbrella mesh. These panels zip onto the top bimini and make a very nice cockpit enclosure. We are very, very pleased with the work Petra did for us.

Around the end of May we sailed down to Grenada. We had to drag ourselves away from Tyrrel Bay because we had a haul-out scheduled for June 4 in Grenada. So we had to leave; not that we wanted to.
Posted by CW Bill Rouse at Tuesday, April 28, 2009

Email ThisBlogThis!Share to TwitterShare to FacebookShare to Pinterest
Labels: Grenada and Carriacou