It is very difficult to know what to write about Venezuela because the political and crime conditions have deteriorated considerably since we visited there. We thoroughly enjoyed our times in Venezuela and never felt threatened in any way. Common sense is required for anyone traveling in this country. There also is always the possibility simply of being in the wrong place at the wrong time, and that can happen in any country.

We sailed from Trinidad to Los Testigos in late September 2006. A family in "la casa verde" cooked dinner for at least a dozen of the boats anchored nearby. The family living in the green house had caught a lot of fish and this would be a way for them to make a little income. There are no cafes or restaurants in this remote little group of islands and the living conditions there are quite basic. This meal was very, very inexpensive to those of us accustomed to the high prices in the Eastern Caribbean. This was a great way for the family to earn some income and we thoroughly appreciated and enjoyed being hosted in their home.

Boats cannot officially clear into Venezuela at Los Testigos. Instead you visit the Guardia Costa or army station there and they decide if you can stop for a day or two. They usually will let boats stop for a couple of days, but that is totally their option. They sometimes tell boats to move on immediately. It pays to be pleasant and if they ask for cigarettes then hand them over. We stayed a couple of days and then sailed to Porlamar, Isla Margarita.

At Isla Margarita we used Marina Juan to handle our clearance and obtain the Venezuelan cruising permit. Well worth his fee to have him take care of this. The local officials prefer not to deal directly with tourists or cruisers; they prefer you use an agent like Marina Juan. We stocked up with provisions and had several enjoyable short excursions at Isla Margarita; then sailed to Pozo on the western tip of the island. We anchored there only one night. The following year a boat was boarded in this same anchorage and a French cruiser was killed. So I would be hesistant to advise anyone to stop here now. The locals are not anti-American or anything like that; they are just very poor with no chance of jobs or betterment of their lives. Most are honest, but at some point anyone will turn to crime if they are hungry enough.

From Pozo we sailed to Puerto la Cruz and checked into the Bahia Redonda marina, where we stayed about one month. This was so much better than it had been in Trinidad that we wondered why we had not come here earlier. There were armed guards at the gates to the marina and it was a safe enclave. But we also ventured outside the marina many times, even went down to the local restaurant-row on the shoreside of the main part of the city with no qualms about being robbed. Everything was perfectly fine and we had a good time. We took the dinghy through the enormous lagoon maze to a large shopping mall where a very good supermarket was located.

Our favorite taxi driver took us to La Cava, a meat market where we were assigned our personal butcher. It is a Venzuelan custom for women to have their own favorite butcher and meat shopping becomes a social activity. The woman sits on a barstool at a high counter and the butcher stands in front of her and cuts the meats to her specifications. I enjoyed doing this twice during our stay in Puerto la Cruz. I sat on a barstool and told the butcher what cut of meat I wanted. He would go into the meat locker and bring out an "entero" cut of beef; this means a large section of whatever particular part of the cow that I requested. He would weigh this entero cut of meat and enter my customer code. Then he placed the meat on the counter in front of me and proceeded to cut according to my requests. For example, from one entero piece he cut a prime rib roast and numerous steaks, some with bones and some boneless according to my request. I had ground beef made from end sections and had him add back some of the fat because the meat was trimmed so lean. All of this for $1.58 USD per pound!!!!

This is because the price of meat is set by the Chavez government. And that government set price is exactly the problem now. There are government established prices on meat, chicken, eggs, milk, rice, sugar, coffee, and many other staple foods. The farmers and ranchers and producers cannot produce the raw products and sell them to the retail stores for anywhere near the prices that the government requires. So there are terrible shortages of virtually everything. It is much worse now than when we were last in Venezuela. La Cava cannot get meat to sell anymore, and that is such a shame because that puts more people out of jobs. It is a vicious poverty cycle and Hugo Chavez is destroying Venezuela. I am so glad that we got to see La Cava and how it operated, and hope that someday things improve. 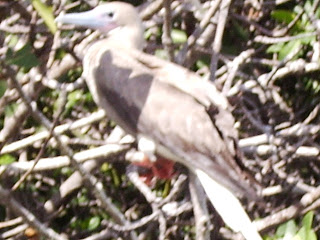 From Puerto la Cruz we sailed to the outer islands of Venezuela. One that sticks in my mind as exceptionally beautiful was Cayo Herradura. It is a good distance from the mainland so robbery is not a problem out there. We also visited Los Roques. I expected to love Los Roques but was disappointed. I just don't like sailing around all that uncharted reef. Then we stopped at Aves de Barlovento and saw thousands upon thousands of red-footed boobies and other birds. That was quite an experience. Also stopped at Aves Sotovento and that was also a unique place. Then on to Dutch island of Bonaire.

In June 2007 we sailed in a small flotilla with 10 boats from Grenada to Porlamar, Isla Margarita. Again we used Marina Juan to handle our clearances. And we again provisioned heavily with what items were available in the stores at the time. This time we did not visit the mainland but instead sailed almost straight to Bonaire, making 3 stops at various Venezuelan outer islands along the way. We skipped Los Roques this time. 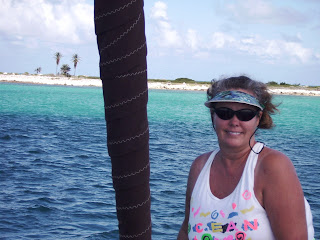 On one leg of this passage we had pole foresails poled out, one to each side, and were making a very fast passage. This is when we learned that we have a "excessive speed" alarm on our Furuno GPS-80. I was down in the galley preparing dinner when an alarm started sounding. I could not figure out what it was. Then it stopped. This happened 3 times before I found the cause. The GPS screen was flashing "excessive speed alarm" because we were exceeding 11.5 knots. That is the fastest we have ever sailed in this boat. We felt totally in control of the boat at that speed in those conditions, but we reduced sail anyway. Really should not be sailing this boat that fast.

We enjoyed the sail to Bonaire on that trip.
Posted by CW Bill Rouse at Tuesday, April 28, 2009

Email ThisBlogThis!Share to TwitterShare to FacebookShare to Pinterest
Labels: Venezuela